Attorneys Serving You and the state of Florida

Polls consistently show that 75% of Florida’s population supports fully inclusive laws that protect members of the LGQBT+ community. However, there is still no statewide law that expressly prohibits discrimination against LGBTQ+ people.

Current statewide laws make it illegal to discriminate in housing, employment, and public accommodations based on:

The United States Equal Employment Opportunity Commission (EEOC) provides protection against discrimination based on sexual orientation at the federal level. Widely known as Title VII of the Civil Rights Act of 1964, the determination of “sex” has been widely litigated. Though recent federal laws have expanded to include sexual orientation, the protection only applies to employers who employ more than fifteen employees and employees who work more than twenty weeks a year.

Federal law 42 U.S.C. § 2000e-2 (Section 703) applies to the private sector, labor organizations, and state and local governments. Section 703 establishes a prohibition of discrimination based on sex and clarifies that sexual orientation and transgender status are covered under those protections.

42 U.S.C. § 2000e-16 (Section 717) deals with employees of the federal government and provides protection against discrimination based on sexual orientation and transgender status.

Title VII remained a gray area for members of the LGBTQ+ community for far too long. Though federal laws continue to gain strength in offering protection from discrimination based on sexual orientation, Florida lags behind much of the country in offering similar protection at a state level.

Despite overwhelming support, the bill has yet to pass into law in Florida. The bill would make it illegal for an employer to fire a gay, bisexual, or transgender person based on their sexual orientation or their gender identity. Though more than twenty states have passed such legislation, the Florida measures have failed in the Legislature for over a decade.

Though “sex” and “gender” are often used interchangeably, they have different meanings in law. The term “sex” is a person’s anatomical identity of male or female. “Gender” is a collection of characteristics that are associated with females and males. Gender discrimination refers to being treated differently in aspects of employment because of your gender identity.

LGBTQ+ individuals may have to endure jokes or slurs about their gender identity or sexual orientation at work. Often, the courts have held that this is a form of sexual harassment and, therefore, is illegal discrimination. However, it can be challenging to draw the lines between offhand comments, teasing and isolated incidents versus ongoing harassment. If the conduct is creating a hostile work environment, you are entitled to protection under the EEOC.

If you feel you are forced to work in a hostile environment based on your gender identity or sexual orientation, contact an experienced employment attorney to discuss your rights under federal and Florida law. The Lopez Law Group works with both employees who feel that they are suffering discrimination and harassment and employers who want to make a safer and more inclusive workplace for their employees.

Everyone has a right to live and work in a place free of discrimination and harassment. Let the Lopez Law Group help you determine your options when faced with discrimination where you work or live.

A company’s policy may often be more stringent than any protection under federal, state, or local law. If so, this provides you with additional protection should you end up in litigation for discrimination. Know your companies’ policies regarding gender identity and sexual orientation so that you can hold the company accountable for any harassment or discrimination you encounter.

Discrimination based on gender or sexual orientation can be subtle or overt. If you feel you have been discriminated against based on your sexual orientation or gender, you should contact an experienced employment attorney in Florida that can review your case and advise you on the best way to proceed.

If you feel you have suffered discrimination based on your sexual orientation, you should:

The Commission on Human Relations is responsible for enforcing state anti-discrimination laws in Florida. You can contact them to learn more about how to file a complaint, or you can contact an employment attorney to determine if you have grounds for a complaint.

You Have Legal Protection From Retaliation

It can be daunting to accuse an employer of discrimination because you fear retaliation. Fortunately, there are state and federal laws in place to protect you from retaliation if you make a discrimination claim against your employer.

Federal employment discrimination laws that contain anti-retaliation provisions that make it unlawful for employers to punish employees include:

In Florida, the Florida Civil Rights Act (FCRA) contains anti-retaliation provisions protecting employees engaged in statutorily protected activities. As discussed above, the FCRA protects Floridians from discrimination based on race, color, national origin, pregnancy, religion, disability, age, marital status, and sex. However, state law has not widely defined “sex” as protection for those in the LGBTQ+ community.

Protected actions under the anti-retaliation provisions of discrimination laws include:

To be considered an adverse employment action, the action must be one that materially affects the terms, conditions, compensation, or privileges of your employment. The courts uniformly hold that the following things constitute an adverse action:

Other forms of action that may rise to the level of unlawful retaliation include:

If you have brought attention to harassment or discrimination and suffered retaliation, it is crucial that you contact a knowledgeable employment attorney as soon as possible. Keep thorough notes and records about the retaliation. The Lopez Law Group is experienced in employment law and discrimination cases and stands ready to offer you a free case review about your case.

The Lopez Law Group is an experienced, compassionate, and knowledgeable team of legal professionals ready to help you understand your rights. If you have suffered discrimination based on your sexual orientation or gender, contact us today for a free case review. We will review your case and work closely with you to help you determine the best path forward. 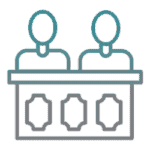