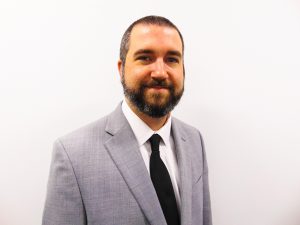 Geoffery Pfeiffer, Esq. is an Attorney of Lopez Law Group, he specializes in Personal Injury.

Geoff Pfeiffer grew up in Ohio and graduated cum laude from Cumberland University in Lebanon, TN in 2012, earning a Bachelor of Arts degree in Criminal Justice. During his time at Cumberland University, he was President of the Criminal Justice Society and was a member of the Cumberland University Cycling Team where he competed in cycling events across the country. Cycling has always been a huge passion in his life, and continues to be to this day. As a criminal justice major, the thought of becoming an attorney was always something he had considered, but had not quite decided. His original plan was to become involved in local law enforcement or pursue a career as a federal officer. During his senior year at Cumberland University, he got a part time job at a law firm and his plans changed. He knew immediately that he would go to law school and pursue a career as an attorney.

Geoff is a firm believer in the law and standing up for those who do not have a voice. As an attorney, he understands that every person has certain rights which cannot be infringed. With a background in personal injury law, Geoff has stood up for clients who were being taken advantage of by the insurance giants. He advocates on behalf of his clients and makes sure that their claims are heard. He fights tirelessly to make sure that those who are injured get the compensation they rightfully deserve. His clients are his number one priority, and he takes pride in advocating on their behalf.

Geoff joined the Lopez Law Group in early 2020 with the goal of continuing to help those in the Tampa Bay community who have been injured through others negligence. A longtime friend of Seancarlo Lopez, Esq., the owner of the firm, both understand the importance of hard work and client satisfaction. The Lopez Law Group was founded on the principle that the client comes first and their satisfaction is always the most important element.