Is It Legal to Record Audio and Video of Police Officers in Florida? 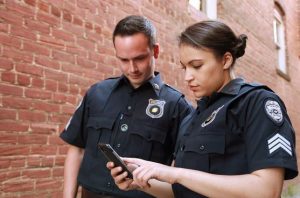 Today, the police are topical for many reasons, in part due to the widespread smartphone recordings of active police officers. This has inspired heated attention and much debate on the legal nuances of the rights of both citizens and officers.

Most of us have heard and/or seen footage of officers asking or demanding to not be recorded in various contexts. In some scenarios, when the citizen refuses, the cop may escalate with threats of arrest – or even possibly force.

And so the question has become urgent: is it legal to record audio and video of police officers? In Florida, the answer is particularly murky. Here’s everything you need to know about the subject.

Most states allow civilian recordings of the police, but twelve states, including Florida, have laws that may complicate its legality. These states have what’s called a “two-party consent” law, requiring the consent of all “parties” before recording takes place.

Florida’s statute 934.03 considers violations of the provision felonious, and it primarily focuses on non-consensual audio recordings. This statute, known as Florida’s wiretapping law, includes both intercepting and recording a wire, oral, or electronic communication without consent.

However, Florida statute 924.02(2) indicates that “parties” don’t include police if they are both active and in a public setting. This is because active-duty police officers aren’t afforded a reasonable expectation of privacy because they are defined as public figures.

Of course, there is a slight catch: the recording cannot interfere with the officer’s ability to do their job. But if you aren’t in the way of an active officer performing their duty, it is legal to record them.

In short, the ability to openly record on-duty police officers in Florida is protected by the First Amendment. But not all cops know this, and unfortunately, some cops openly ignore this fact even if they know the law.

Even though it’s your right to record, you may risk your phone’s confiscation or risk being harassed or even arrested. And while it’s likely any legal charges wouldn’t stand, there are some things you can do to avoid this scenario.

If they claim harassment or cite the audio portion of the wiretapping law, they may try to confiscate your phone. Calmly inform them they need a warrant or reasonable suspicion there is criminal activity on your device to do so.

If they ask what you’re doing, remain respectful, and remind them it’s your right to record. If you are not interfering with their work and are staying visibly safe, you are doing what is lawfully required.

It is very important you are in control of any situation where you may have to record a police officer. Keep your wits in order to avoid charges of disorderly conduct, obstruction of justice, and violation of wiretapping laws.

Other do’s and don’ts for recording the police

A police officer is likely to interpret being recorded as “contempt of cops.” In order to further prevent any escalation, here are some things you can do to completely cover your civic bases.

Don’t run at the police or stand too close to them while they’re working – this could alarm or distract them. If they say you’re too close, but you know you aren’t, respectfully inform them you are recording for documentation purposes.

Don’t shove a camera in the face of an officer – they won’t recognize you as press and they may escalate. Keep your phone at waist level, tilted upward, or generally close to your body to record in a non-confrontational manner.

Don’t make any sudden movements when preparing to record or in the middle of recording an officer on duty. Have your phone ready, because reaching for your pocket, unfortunately, may look like you’re grabbing for a gun.

Do make sure your cell phone is passcode protected to protect your videos or other personal information. That way, even if they confiscate or destroy your phone, that content or information will survive and can remain useful.

Do remain calm, especially if you’re in the middle of a confrontation with a police officer as a result of your recording. It may not solve everything, but if it’s on video, it could prove your innocence in a court of law.

Do understand the police do dangerous work, and if not out of respect, cooperate for the good of all parties. They may misread your movements or words and assume a threat because that’s what their job conditions them to do.

Why would you want to record the police? 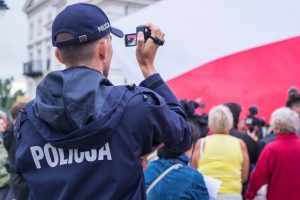 Unfortunately, one of the biggest issues in America now concerns issues of police brutality and harassment, particularly of minority populations. Without proof of injustices, offending officers wouldn’t be held accountable – meaning recordings play an important role in establishing justice.

If you’re walking down the street and notice an officer treating a citizen unfairly, what happens next could be crucial. While every situation won’t result in brutality, the fact is some do – and civilian recordings can help catch law-breaking officers.

In this sense, it’s not only your right to record police officers – in some scenarios it is your civilian duty. While you shouldn’t deem every officer guilty, some officers treat entire demographics harshly, and recordings can shed light on this.

Ultimately, there wouldn’t be a need to take recordings of police officers if there wasn’t such a problem with policing. Improving these conditions requires trustworthy police officers in addition to brave citizens – both need to make a stand in society.

In what instances can you not record?

There are certainly some grey areas where civilian recordings, even of officers, could be unlawful, and this also deserves consideration. Officers are people, and every person is entitled to some privacy, so let’s investigate instances in which you cannot record.

If engaged in a private conversation over the phone or behind closed doors, officers may be covered by Florida’s privacy statute. This is because the conversation is not intended or required to be a public occurrence, and so the statute applies.

Additionally, common sense would indicate taking a recording of an officer in the restroom or in their home would violate. Secret recordings of private settings are considered video voyeurism, violating Florida’s statute 810.145 and defined as second- or third-degree felonies.

It’s worth noting other laws, such as laws against trespassing and stalking, could implicate your recordings as unlawful. Remember, the statute which allows you to record an officer requires the recording to take place in a public setting.

The most likely scenario your recording would be deemed unlawful is if it violates statute 934.03 – nonconsensual audio recording. If you can record without sound, there’s no cause for concern; otherwise, take the risk, record, and trust the courts.

Is there an example of someone wrongfully arrested for recording the police?

A commonly cited wrongful arrest in Florida regarding recording a police officer took place in Tampa in 2013. This example can shed some light on whether it is lawful to record during a traffic stop for a DUI.

Soon after the phone started recording, she was placed under arrest as well for obstructing a police officer non-violently. This happened even though she was over 20 feet away from the officers, suggesting they were unaware of the law.

In fact, not only did the officers use aggressive force on her husband – they showed similar force towards her. The arresting officers shoved her into a fence during the arrest, which would later come back to implicate the officers.

In the end, it was found that Mrs. Presson’s First Amendment rights were violated by the officers that night. The city eventually settled a claim for $41,500 – a sum that could have been higher if it had seen court.

What does this mean if you or someone you are with is stopped on the road, potentially facing a DUI? It’s your right to record it, but like any instance where cameras and police are involved, the situation may escalate.

Serve and protect yourself and others 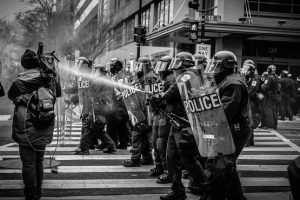 There is a growing desire for civilians to record on-duty police officers to quell public concern over issues of accountability. Some officers welcome this change, recognizing it as a change of the times, while others adamantly – even illegally – oppose it.

While there are a lot of inconclusive discussions circulating around social media or even your community, the facts are facts. In Florida, it’s legal to openly record the police, and the world could greatly benefit from this – if safely exercised.

It’s always your choice to record a police officer, and as a result, you should be aware of the risks. If you follow these tips, you’ll follow the law, leaving the rest up to those sworn to protect and serve.

The Lopez Law Group has experience in all types of cases, including those involving audio-video recording, such as those involving police incidents. We can negotiate for a settlement for your case, take it to trial in state court, or guide you through the process of joining a class action suit. We will talk you through each of your potential options and give you our expert advice over the best course of action for you.

Give us a call at (727) 933-0015 to schedule an appointment to meet with one of our attorneys. We will carefully review any documentation you have and always provide you with an honest assessment of the strength of your case. We will help you fight for your rights and the compensation you deserve so that you can focus on moving forward.