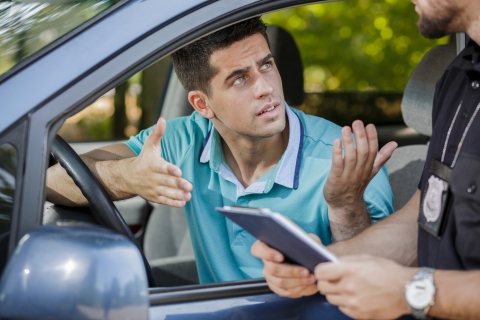 The Lopez Law Group has St. Petersburg traffic attorneys familiar with Florida traffic law, and we are prepared to help you defend against any traffic violation in court. If you have been issued a traffic violation in the state of Florida, there are times you need to consider hiring an attorney to help defend against the violation. The most significant concern for Florida drivers is often the imposition and potential consequences of the Florida points system.

The points system, in Florida, can be detrimental to your car insurance, causing you to pay an increased premium over a long period of time. The points system can also eventually lead to a suspension of your license to drive, causing significant hardship and financial repercussions.

Getting a traffic ticket attorney involved as soon as possible is a smart move that can save you from a giant headache. Deciding to contest a ticket on your own, without the advice of counsel, seldom has the desired outcome.

How does the points system work with respect to the status of my Florida driver’s license?

The “points” system affiliated with your Florida driver’s license is overseen by the Florida Department of Highway Safety and Motor Vehicles.

What violations cause points to be added to my license?

Certain traffic infractions have significantly higher point values. Infractions such as a failure to yield to a school bus, unlawful possession, use of a traffic signal preemptive device, failure to obey traffic control signals, and reckless driving can yield point values that have an immediate impact on your insurance costs.

What can happen if I get too many points on my license?

If you accumulate too many points on a Florida driver’s license during a set period of time, you will face temporary suspension of your license, as well as significant related fees and the possible need to have your license reinstated.

Points pose a significant risk to your ability to drive legally. Points can also result in being dropped by your insurance carrier, or having your insurance rates skyrocket. That is why it is essential to get traffic violations dropped or reduced to a non-moving violation with no points assessed whenever possible.

What if I am charged with a criminal traffic violation?

In addition to fines, points, and the potential suspension of your license, some traffic violations are far more serious. Some traffic infractions can have parallel criminal charges. These include offenses such as:

These crimes can carry administrative penalties, as well as significant points on your license. If you are a repeat offender, or the alleged crime is particularly serious, such as leaving the scene of an accident where injuries were caused, you can even face potential jail time.

Some criminal convictions of a DUI, when adjudicated in criminal court, can result in no assessment of points. If the traffic violation you are charged with is a criminal act, you are entitled to have an attorney represent you. You want an attorney who is experienced in criminal law in the state of Florida. The Lopez Law Group can help you negotiate with the criminal court, and often, it can get you a much more satisfactory deal than attempting to fight criminal traffic charges on your own.

How does traffic court work in Florida?

After you receive a traffic citation, you will be notified of when and where you need to show up for court. The very first hearing you will attend is known as the arraignment. Make sure you arrive at the courthouse with enough time to meet with your attorney and know what to expect.

At your arraignment, you will enter a plea. You will have the option to enter a plea of guilty, no contest, or not guilty. You may be offered a reduction in the fine if you plead guilty. If you decide to plead not guilty, you are asking the court to proceed with setting a trial date, and you are officially contesting your ticket.

At the trial, the police officer will produce any evidence they may have against you. Your attorney will then have the chance to cross-examine the police officer.  As you might have heard, it is not uncommon for officers to not show up at these proceedings, which is true. However, it is a poor decision to base your entire defense on the hope that the officer does not show up to court.

Your attorney will continue to argue your case and present evidence in your favor. If you are found guilty, you will be ordered to pay the fine, or if you have enough points on your ticket, you may have your license suspended. If you are found not guilty, the ticket will be dropped as though it never existed. Not only will it not be reflected in the points system, but it also cannot be used against you by your insurance company.

Should You Attempt to do Traffic Court on Your Own?

While traffic court may seem like a relatively straightforward process, it is to your benefit to get an attorney involved. There are many components when it comes to a trial, and they can seem overwhelming to someone without legal experience.

Specific rules must be followed when questioning witnesses and when speaking to the judge. Though it is “only” traffic court, it is still a court of law, and you can make your situation worse by attempting to make your case without the help of legal counsel. It is always best to hire an attorney and let them speak on your behalf.

The attorney will be with you at your arraignment and will be with you if you decide to contest the ticket and go to trial. You need an attorney who is willing to work with you to determine the possible outcomes for your case, and who will give you an honest assessment of what you should do. At The Lopez Law Group, our clients are our primary concern, and we want you to be happy with your representation. We will consult with you throughout your case to make sure we select a strategy that fits your goals.

If you or someone you know received a ticket and have requested to appear at an arraignment, the Florida traffic infraction attorneys at The Lopez Law Group are here to assist. If you feel you were issued a citation wrongfully and want to fight it, always get a traffic attorney involved as soon as you can.

We will be able to discuss the strengths and weaknesses of your case with you, and we will advise you on whether or not you have a strong case. We can walk you through the potential outcomes of the case and let you know our honest assessment of the best course of action. Give our St. Petersburg traffic attorneys a call today at (727) 933-0015. Our traffic ticket attorneys are standing by and willing to assist you in any way we can.