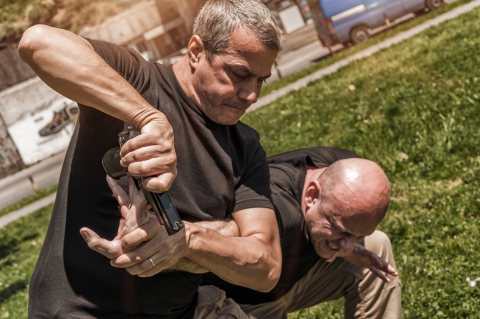 In these uncertain times, it is not unusual to contemplate the possibility of needing to act in self-defense or in defense of another. In the United States, it is well-established that a person is entitled to defend themselves against threats or acts of violence. Understanding self-defense statutes on a national and state-wide level will ensure the steps you take to protect your family are within your legal rights.

Self-defense refers to the actions taken against an attacker to prevent severe injury and physical harm. It is often an undesirable but necessary measure to protect you and your loved ones. In circumstances where there are threats of violence or deadly force, you should feel empowered to act quickly. The self-defense lawyers at the Lopez Law Group want to ensure you feel empowered to do so without fear of legal repercussions.

Even when acting in self-defense, there is a possibility that charges may be filed against you. Especially if the attacker sustains injuries or the incident results in death, you must understand your rights to self-defense. The St. Petersburg self-defense attorneys at The Lopez Law Group know how to litigate such claims while preserving your rights to protection.

Within the United States, you are permitted by law to defend yourself with reasonable force in the instance of unlawful or immediate violence. This statute applies to situations that occur inside or outside the home. Some cases that may prompt self-defense are:

However, there are certain important limitations and exceptions to these self-defense issues that are important to understand.

Filing a self-defense claim in Florida

Consulting with a knowledgeable attorney is a critical first step should you encounter an incident in which actions were taken in self-defense. If the case goes to trial, it is essential to understand the conditions in which self-defense is permitted by law.

When evaluating self-defense claims, several factors may come into question. The following are questions that will play a pivotal role in determining whether you were acting in self-defense.

Who provoked the incident?

The individual claiming self-defense cannot be the person who provoked the altercation.

Was using force the only option for self-preservation?

Although Florida does not maintain a duty to retreat, it could still influence a jury’s decision.

Was action taken in response to an immediate threat or out of retaliation?

Self-defense can be claimed only in situations that involve imminent danger. If a person acts out of revenge for an incident that occurred previously, a self-defense claim would not be validated.

Was the action taken proportionate to the threat?

If someone defends themselves from a non-deadly threat with deadly force, this may complicate a self-defense claim.

Were actions taken within reason?

The underlying principle is making reasonable decisions when acting in self-defense. If you believe the attacker has a real weapon, it would be reasonable to respond with equal force, even if it later surfaced that the weapon is fake.

In the occurrence of an imminent threat or deadly-force, you have a right to take reasonable action to prevent harm. Under Section 776.012, Florida Statutes, you are justified in using non-deadly force to the extent to which you believe is necessary to defend yourself. You also have a right to protect someone else should they be unable to protect themselves against a threat.

Self-defense applies only when a threat is active: one that implies or is an actual show of force. Offensive language alone does not support a self-defense claim. If an attacker withdraws, any use of force is considered retaliation, rather than self-defense. Additionally, the use of force should be proportionate to the threat. Unless there is reasonable evidence to suggest that an attacker is going to use deadly force, deadly force would not be considered self-defense. 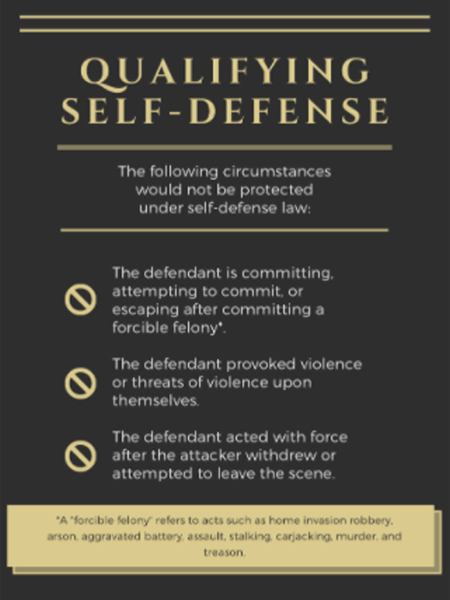 The second amendment permits U.S. citizens to bear arms, but it is your responsibility to know how and when they can be used in self-defense. You should only use deadly force such as firearms if you are in reasonable fear for your life. Acting with reason means responding appropriately to the dangers in which you believe to be present.

In some jurisdictions, you must attempt to retreat before using deadly force in self-defense. However, in the state of Florida, there is no statute mandating this practice. It is your legal right to stand your ground in the face of an imminent threat.

The Florida self-defense statute, well recognized as the “Stand Your Ground” law, was one of the first self-defense statutes of this sort.  It both removes the duty to retreat and also is a significant expansion beyond the “Castle Doctrine” and states that, “[a] person who uses or threatens to use deadly force…does not have a duty to retreat and has the right to stand his or her ground if the person using or threatening to use the deadly force is not engaged in a criminal activity and is in a place where he or she has a right to be.”

The Castle Doctrine asserts that personal dwellings are specifically exempt from a duty to retreat. Under Section 776.013, Florida Statutes, you are permitted by law to stand your ground when occupying a place of legal residence, including a home, vehicle, or business. In this case, it is presumed that anyone unjustifiably trespassing or forcefully entering the premises has the intent to commit an unlawful act.

There are several conditions to this statue, including but not limited to:

When invoking your right to defend yourself under Florida law, there are many other critical statutory provisions of which to be aware. Within Florida, a person who properly engages in the justifiable use or threatened use of force is immune from both civil liability and criminal prosecution. The statute defines “criminal prosecution” as “arresting, detaining in custody, and charging or prosecuting the defendant.”

How to protect yourself

Self-defense classes can help you feel more empowered, whether inside or outside your home. There are also several items you can carry on your person should you encounter a physical threat.

The following items can offer security when navigating the city alone or walking through darkened streets. However, it is crucial that you learn to use these tools properly. It is also important to note that, in the instance that an attacker takes possession of these items, they could be used against you.

Know how to fight back

In a physical attack, there are a number of ways in which to fight back:

When approached by an attacker using a deadly force, such as a firearm, it is essential to read the scene. In the event of an armed robbery, for example, it is more likely that they want your belongings rather than your life. You will have a split second to read the circumstances. Whether or not you have armed yourself, there are ways to respond with reasonable self-defense:

Don’t wait until it’s too late to learn skills in self-defense. You can never be too prepared to confront a threat, whether deadly or non-deadly. Know and practice the steps to protect yourself and others within your legal rights.

Our Self Defense Lawyers are here to help

Knowing your right to protect yourself and your loved ones will provide confidence when it matters most. If you are arrested for defending yourself in the Tampa Bay region, please reach out to us for a consultation with one of our self-defense lawyers at (727) 933-0015. The Florida self-defense attorneys at the Lopez Law Group are ready, willing, and able to help you assert your self-defense claim and demonstrate to the court that you were entitled to the justifiable use of force under Florida law.